On most days someone will wander into this rustic little saloon in a lush valley outside Aspen seeking directions to the house of late journalist Hunter S. Thompson.

“I tell them, ‘You know he’s dead, don’t you?'” said Rachael Bannon, a waitress at the Woody Creek Tavern.

The regulars will smile politely and send them in the wrong direction.

“They’ve even offered me money, but I’ll never tell,” one said. 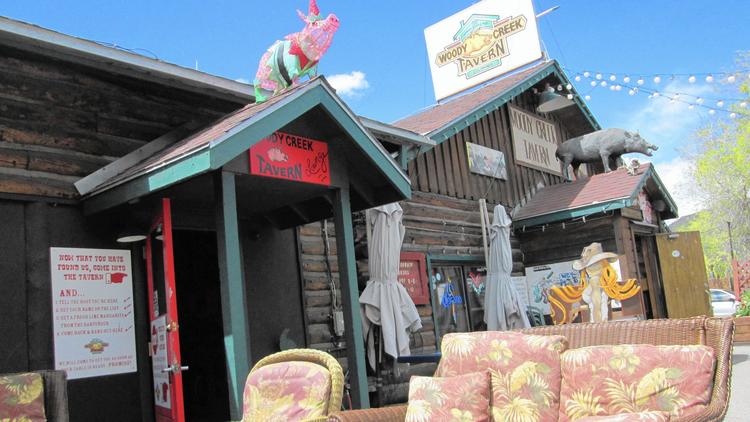 The Woody Creek Tavern near Aspen, Colo., was the local watering hole for the late Hunter S. Thompson, whose fans still visit the bar 10 years after his suicide. (David Kelly / For The Times)
Ten years after Thompson’s suicide at his nearby Owl Farm home, the bar where he got frightfully drunk, abused drugs and incited mayhem has become a shrine to the writer whose irreverent dispatches on everything from huffing ether outside Vegas to presidential politics created the literary genre known as “gonzo journalism.”

Disciples and fans come to sit where he sat, drink what he drank and revel in a manic life force that lingers a decade later. Walls are adorned with photos of Thompson: He sits in solitary repose over his typewriter or cavorts with actors Johnny Depp and John Cusack. His melancholy portrait hangs near the kitchen, infused with the grease of countless hamburgers.

But while many breeze in on whimsical pilgrimages to commune with some ethereal gonzo spirit, longtime Thompson compatriots remain fiercely protective of their mercurial friend.

“We all miss him,” said a friend who identified himself only as Mike. “Hunter and I were political opposites. I’m a Vietnam vet and we would argue about the war, but it was never personal.”

Mike, 69, with a gray ponytail and a cowboy hat, was the first customer of the day. He sat at the bar and ordered a Corona and six packets of Pall Malls for a friend down the road.

“I recall him carrying a shotgun in his golf bag,” Mike said. “I think he threatened to shoot everyone from time to time.” 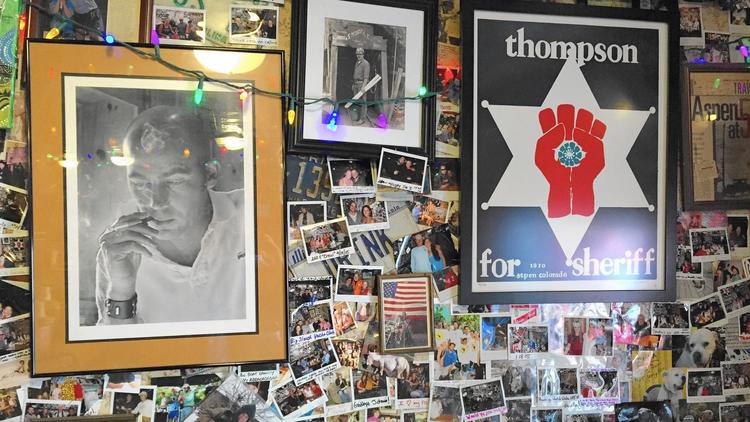 A portrait of the late Hunter S. Thompson on a wall at the Woody Creek Tavern. (David Kelly / For The Times)
He also recalled Thompsonmarching through the tavern doors, leveling a gun at the petrified bartender and pulling the trigger. Fortunately, he was shooting blanks. Another time he emptied the place by igniting a smoke bomb.

When he died, his ashes were blasted from a 100-foot cannon.

“That’s why the fishing was so good in the river afterward,” Mike said.

Bartender Eric Kincade fields calls from people around the world asking about Thompson, especially what he drank.

“He liked tequila but he drank everything,” he said.

“No, he couldn’t get the cork out of the bottle,” Mike replied.