I never really attended church as a child. Many of my friends did, sometimes their parents would invite me along, probably just to keep from hanging out on their front porch while they were away. The few times I went, I usually sat there unaffected, packed tightly within the cottony-soft blankets of ignorance. Feeling as moved spiritually as I would sitting in the lobby of a restaurant waiting for a table. Just enveloped in boredom with other people listening to crappy music, each hoping to be picked next.
I recall my first experience with true “religion” when it arrived around the time I was twelve-years-old. The song “Imagine” by John Lennon was playing on the local college radio station. As it occurs to me now, the lyrics enthralled me. Those words had such a haunting beauty I was suddenly overwhelmed with emotion. Goosebumps formed on my forearms and I began to weep softly. 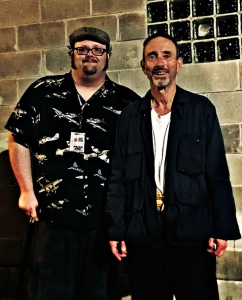 That was what I considered to be my first encounter with what I felt and still feel is a direct channel to a higher power. Music. Music is my religion. I do not worship it, though I am nourished by it. What is it about hearing music that moves a person in such a manner? When the tones cause an involuntarily emotionally and physically reaction. I always look for that same feeling in all the music that I consumed. I don’t listen blindly in other words. The sensation of being moved in such a manner is almost an obscure luxury in recent years. So much trash to sift through for so little nutrition. Those moments of finding something singularly cool become so much more special, I always fall backwards into the profound and surrender to the entire experience, every single time.

I had the opportunity recently to bask in that magnificent old time feeling once’t again. This time I took a trip to Kentucky for another “spiritual” first, to see Jonathan Richman, who is at his core a true American Rock-n-Roll original and legendary singer/songwriter. Richman is a prime example of how it is to be a rock star that has the integrity to operate within a set of their own standards. There is rarely huge advertising campaigns announcing his arrival. It’s all word of mouth. There is no merchandise table. He hits the stage with drummer Tommy Larkins and both create a very personal live experience where Jonathan pours out every ounce of his lovely essence. You feel like every song performed is especially for you.

Richman has achieved fame by adding a major contribution to the development of what became known as the American punk movement. A sound that grew largely out of the “garage band/proto-punk” bands of the 60’s. Richman’s early band The Modern Lovers has been cited as being very influential to musicians and writers across many genres and mediums. Jonathan Richman’s music has been said to be one of the central arteries between bands like the Velvet Underground to the blossoming origins of the New York City and English punk scenes of mid 70’s. He eventually dropped the name Modern Lovers and began touring simply as Jonathan Richman. Throughout the 1980’s and early 1990’s Richman maintained a worldwide cult fan base performing around the globe, followed by a widening spotlight on him with his appearance in the Farrelly Brother’s epic comedies, 1996’s ‘Kingpin’ and ‘There’s Something about Mary’ in 1998.

I felt evidence of the legend of Jonathan Richman, live and in person that night at Zanzabar in Louisville within the opening strains of his first number “My Baby Love Love Loves Me”, Richman immediately gained the warm attention of the crowd and never once did they let go. Jonathan merrily held his guitar up high and gave his hips a swivel, all very sweetly and sincerely, keeping with his reputation as being child-like and exuding a certain sort of whimsy. He charmed the crowd with the things he said and the little dances he would erupt into even in the middle of songs, leaving Tommy to provide the percussive footsteps. The goosebumps hit me right about halfway through “Springtime In New York”. In the course of the show there were many times I felt that same kid-ish feeling where I was just pulled into the absolute joy of the occurrence.

Jonathan’s ability to relate to an audience is something I honestly have never experienced in a live show. The crowd was asked to sing along with “People Are So Disgusting” as Jonathan went through many worst case scenarios of motel existence and his sympathy towards those who have to clean up the messes. His eyes would move from person to person, each time you could see the little light of connection.

My friend Chris Martin, the fella responsible for getting me to the show later told me that “Jonathan looks at people until they smile. Then finds another person.” The point is all about getting everyone in the room singing and playing along, making them participants in the performance rather than just mere observers, especially when Jonathan looks out into the crowd and reminds them that it’s ok for them to give him “the beat”. In many cases he is like if Bob Dylan had a younger, more pleasant brother. The show ended with a updated version of a The Modern Lover’s era song, “Old World”…

…and there were those who hooted and cheered for an encore, Jonathan walked back onstage, read a wonderful poem and it was done…dignified.

Through some mutual folks, my friends and I were able to meet Jonathan and Tommy as they were in the process of packing up gear and finishing up a brief nosh before hitting the road. Jonathan was speaking with someone from the venue about the issue of sound proofing. Jonathan’s sound live is not loud, he makes it powerful and that power certainly was concentrated in that room. He was talking about audiences listening to live music comfortably and said that when the club owners allow bands to dictate loud volume criteria the owners are just catering to the band’s sense of stage fright.

As Tommy was packing up the last bit of his gear, things quieted down and we finally spoke with Jonathan. He told us about touring around, he and Tommy travel around quite frequently and do it very simply. Usually the arrangement is Jonathan and Tommy in a modest van and a double handful of nameless motel rooms; in some cases they make it abroad and play to appreciative crowds in Europe and Asia as well. Jonathan also said that he likes to go to schools and perform for kids. He has no problem taking the class that has the most unruly child. He proudly confessed to us that usually by the end of the show that unruly kid is leading the applause. Both guys were very welcoming to us and though the visit was brief it has had a very lasting effect on me. We said so long and both Jonathan and Tommy hopped into their van and proceeded to make their way to Chicago.

Dire Straits “Money for Nothing”